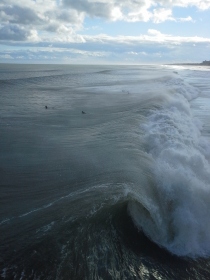 I opened my Roth IRA on November 8, 1999 and immediately mailed a check for $2000.00 to Fidelity. Aware that I had opened a new account, I took advice from someone I knew who suggested buying a promising technical stock by the name of Conexant because it was quickly growing in value.

Once the funds were available, I bought 32 shares of Conexant stock at $62.50 per share. The value of the stock quickly rose, I checked my Fidelity account on a daily basis, watching it double, increasing to $4000.00. I was pleasantly surprised to witness my new Roth IRA immediately double.   I did not plan to purchase additional shares because the limit for a Roth at that time was $2000.00 annually.  Believing that investing was easy due to the seemingly easy growth filled me with contentment…but only for a short time.

Unfortunately Conexant’s stock value fell drastically a couple of months later. My investment decreased as fast as it increased and I learned immediately as a beginner that one’s money can quickly vaporize in the stock market. The stock’s value plummeted and I was looking at a loss. By the early 2000’s the stock’s value was in the hundreds of dollars. I lost almost all the money I put into the stock. I never sold Conexant but held on and watched it dip into cents per share as well as branching into two new companies, Mindspeed Technologies and Skyworks.

This was a learning experience and I was relieved that it was only $2000.00. I hoped I could recoup the lost money by the many years of investing that I had ahead of me.  Shortly after opening my Roth someone suggested buying stock in P&G since it’s value dipped to near $50.00 per share.  Because it was a new year I was able to invest another $2000.00 into my Roth. Undeterred, I mailed a second check to Fidelity and bought about 38 shares of P&G. Not long after, I watched the value of my minuscule portfolio return to normal as the value of the P&G stock rose, bringing it near $4000.00, my original investment amount. I was happy to break even and planned to continue to invest in the years to come.

Hi I am 44 years old and started dividend investing in 2015 at the age of 41. This blog provides an example of portfolio changes and dividend growth and compounding. It is very exciting to witness the changes on a weekly basis. My goal is to partially retire within the next three to five years by living frugally and building up my portfolio into a mini pension to supplement and support my frugal lifestyle. I am interested in vegan food, biking, music, exercise, nature, photography, gardening, writing, travel, and investing. I daily wish to be able to have more time to do these things yet I am sadly torn away as I head off to work each day...